This is our last newsletter of 2018 and we have a varied selection of articles which we hope you enjoy and find useful. If you have any queries on the subjects discussed, please don’t hesitate to get in touch.

The following article from Seven Investment Management provides an interesting view on market volatility this year.

STRAIGHT TO THE POINT

Markets are volatile. They move up and down. Always have; always will. Whenever markets fall, commentators concoct stories to explain exactly why they’ve fallen – stories that are often alarming and are frequently complete inventions, with no basis in fact. Usually, it’s best to ignore the headlines.

We have different ways of looking at market movements, that helps us to gain some perspective, block out the noise, and remind us that it’s normal for markets to jump around.

One way to think about volatility is to look at how often the market moves sharply up and down. The chart below shows the number of large daily moves in a given year for the FTSE All Share, dating back to 1969. 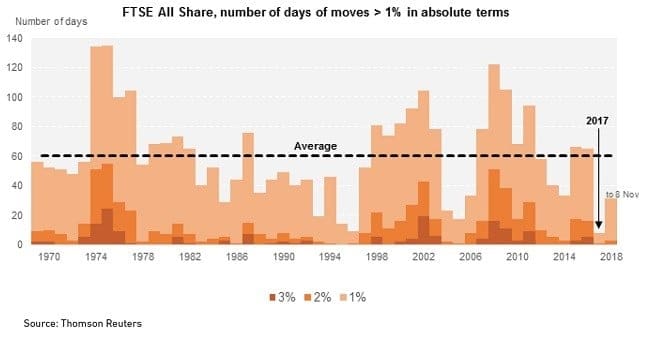 This year investors have been focussing on how volatility has been returning to the markets. The above chart gives a longer term perspective; while equity market volatility is definitely higher than last year, 2017 was the outlier year, not 2018.

It’s also important to note that in equity markets, periods of calm aren’t necessarily followed by a storm. 1996 and 2005 were also quiet years for the FTSE 100, but even though it was choppier in the next two years, in each case the market still rose overall.

DON’T WORRY ABOUT BIG ANNUAL MOVES IN MARKETS EITHER
Although investors are sometimes spooked by large one day moves in markets, what really matters is sustained periods of losses. Over the long term equities tend to rise. But the long term is made up of lots of short term periods, so we need to be able to hold our nerve through these.

The chart below shows the maximum peak to trough move of the FTSE All Share each year on the horizontal axis, and the eventual market return in that year on the vertical axis. Each dot is a calendar year – the positive years are in black, with negative years in red. 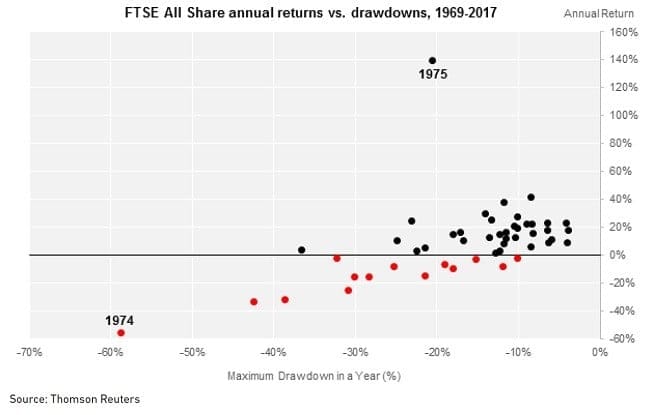 There are two outlier years that are highlighted on the above chart, for shock value, and also, as a reminder that great years often follow terrible ones.

[End of Article]If you have concerns regarding the current stock market movements please get in touch with your usual JJFS contact.

Albert E Sharp have issued their monthly market commentary which provides further expert comment and context around the current stock market volatility and is an interesting read. Click here to download and read the commentary.

A Word of Warning about Pension Scams

We were alerted recently by one of our corporate clients that a member of their staff pension scheme had been cold called by someone claiming to be a representative of the pension provider, suggesting there were problems with the scheme. The member wisely ended the call and the scam attempt failed. However it was a stark reminder that the risk of financial fraud is ever present and fraudsters are continually developing new ways to trick their victims.

Pension holders aged 45-65 have been identified as most at risk of pension scams and earlier this year, the Financial Conduct Authority (FCA) and The Pensions Regulator (TPR) jointly carried out a poll of this group to gauge their awareness of such scams. The results showed that almost a third of this age group were unsure how to verify whether they were speaking to a genuine pension advisor or provider on the phone. Worryingly, the Poll also showed that one in eight 45-65 year old pension holders would trust an offer of a ‘free pension review’, one of the most common tactics used by fraudsters when cold calling their potential victims.

Other tactics used by fraudsters are out of the blue contact by post or email, adverts on social media or online and even approaches from friends or family who themselves are unknowingly being scammed. Scams usually include offers of higher returns whilst downplaying the risks, help to release cash from your pension even if you’re below the age of 55, or unusual or overseas investments that are not regulated by the FCA e.g. overseas hotels, forestry, green energy schemes.

The new pension freedom rules have proved very lucrative to fraudsters with victims losing on average £91,000 each during 2017. Although the Government is due to enforce its Cold Calling Ban this Autumn (having missed their original deadline of June!) it is unlikely to stop the scam cold callers altogether.

If you are approached out of the blue regarding your pension, hang up immediately and contact your financial adviser. It is also worth visiting the FCA’s ScamSmart website which provides a wealth of information on how to spot a scam and how to avoid being scammed. If in doubt, please get in touch with your usual JJFS contact.

Research carried out by Canada Life indicates that many UK workers are in for a huge shock if they fall ill or become disabled and are unable to work. Those polled were under the illusion that the statutory sick pay benefits provided by the Government will be sufficient to tide them over until they return to work, when in reality the figures are very different:

If the above strikes a chord and you are concerned about the consequences if you were suddenly unable to work, please get in touch. There are various types of income protection and critical illness cover available that will provide a lump sum and/or an income should you become unwell or disabled and unable to work.

Periodically it is worth reviewing your existing cover to ensure it is still adequate for your needs especially if your circumstances have changed (for example an increase in earnings). Please get in touch with your usual JJFS contact to discuss.

* the maximum for people who qualify for the Work-Related Activity – for those who could be assisted back to work – Employment and Support Allowance (ESA).

Simon has hung up his competitive boots for the season having notched up a trio of sporting successes during the summer.  In August, he completed the Myton Hospice 100K challenge, cycling 100 kilometres over a hilly course on a very hot day at the height of our exceptional summer. He took just over 4 hours to complete the distance and the event overall raised more than £30,000 for the Myton Hospice, which is local to Simon in Warwick.

In early September he ran the Stratford-upon-Avon 10K, joining 1500 other runners on a course around the centre of Stratford. He completed the course in a time of 52:32, just 21 seconds off his personal best, raising funds for another local hospice, the Shakespeare Hospice.

Simon’s last competitive 10K of the year took him to Worcester where sporting legend Steve Cram sounded the starting pistol for the race which he founded and organised, with over 4000 runners competing.  Simon managed a personal best of 51:37, a great way to finish off his sporting year.

Simon’s competition boots may be hung up until next year but he continues to train in the evenings and at the weekend so no doubt he will be back with a vengeance in 2019. Watch this space.

Michelle Cook, meanwhile, wondering how to top her Sky Dive of 2017, decided to walk 26 miles around London in September, to raise funds for bowel cancer research. Starting in Southwark Park at 9.30pm and finishing at Old Billingsgate the following morning, Michelle and her 4 team mates completed the route in 8 hours, 53 minutes and 57 seconds. She had been suffering with quite severe knee problems whilst training prior to the event and was hobbling around the office in pain, but she strapped it well on the day with a strong knee support, and to her relief it held up and didn’t cause any problems. She raised a total of £250.  Well done Michelle. 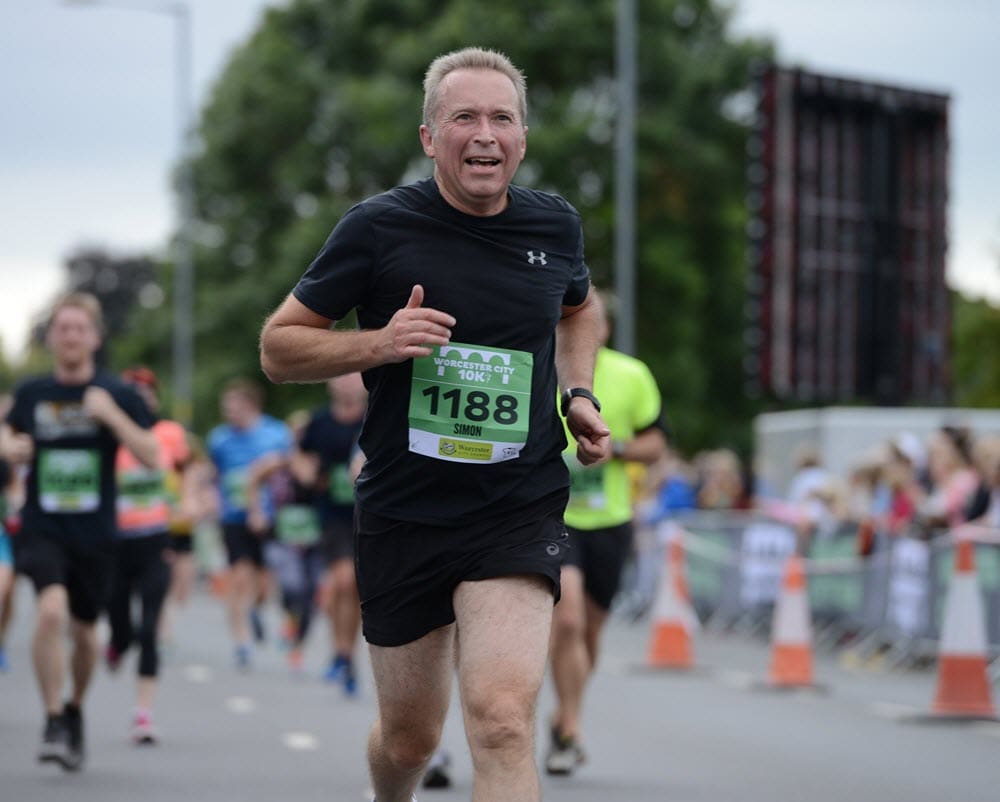 Please note that the office will close at 5pm on 21st December and will re-open at 9am on Wednesday 2nd January 2019.