Hope you are enjoying the hot weather we have been having over the past few weeks. In this newsletter we have a varied selection of articles which we hope you enjoy and find useful. If you have any queries on the subjects discussed, please don’t hesitate to get in touch.

*
IHT Planning: Exempted gifts from normal expenditure out of income

The annual exemption limit for gifts under IHT rules is £3,000 and for larger amounts, the donor must survive for 7 years afterwards. However, gifts made from normal expenditure out of income can be a useful way to mitigate inheritance tax liability as you do not have to survive for seven years after making the gift. In order to be exempt, the gift must be an ongoing commitment made from your normal expenditure, be paid out of your income and must leave you with sufficient income to maintain your normal standard of living. There are exceptions and conditions attached but if it is something you would like to discuss please get in touch.  For more information on IHT planning generally, please read our handy factsheet 5 Tips to Reduce Your IHT Burden.

If you applied for a Power of Attorney (or maybe you know someone who did) between 1st April 2013 and 31st  March 2017, then you can claim a refund of part of the application fee. This applies to both Lasting POAs and Enduring POAs and depending on when you applied, the refund will vary from £34 up to £54. Click here for more information and to claim your refund.

*
Since the introduction of the Pension freedom regulations, a total of £17bn of pension cash has been withdrawn with £3bn transferred into bank accounts yielding little or no interest.

AJ Bell, (pensions provider) conducted a survey of 370 people who had accessed their funds since April 2015 and then applied the results to official figures produced by the HMRC. Their research produced some interesting results on how people are spending their pension pots. 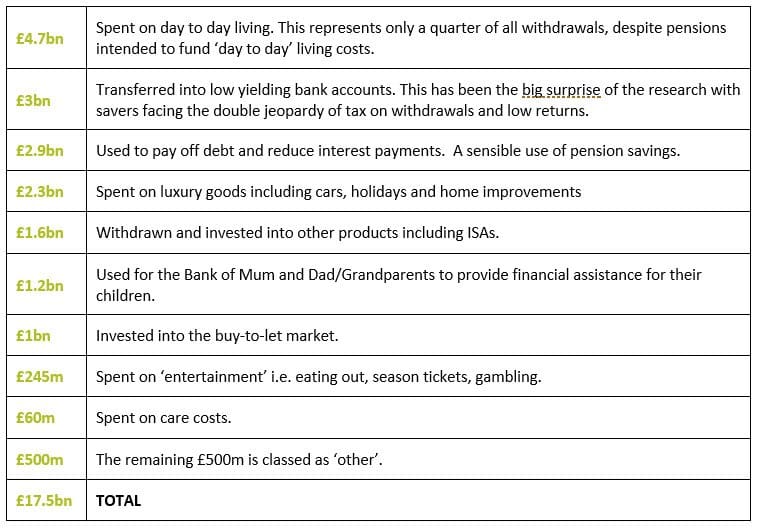 It is clear that the original concerns of a complete pension ‘free for all’ are largely unfounded, nonetheless it illustrates that some people are making retirement decisions that are less than ideal.

Steve Webb, policy director of Royal London is not one to hold back on innovative or somewhat controversial ideas, and his latest thoughts on funding long-term care provide an interesting spin on the whole care funding debate.

The Government recently announced a number of plans under consideration to help fund the increasing cost of long term care including the removal of the NI exemption from working pensioners. However Webb has been publicly mooting the idea of a ‘care insurance’ scheme paid for by a one-off premium at drawdown. The scheme would be targeted at middle-income earners enabling them to use some of their drawdown funds to purchase an insurance that would pay for care costs later in life. Branding this an ‘inheritance insurance’ Webb feels it could prove popular, enabling savers to fund their care costs whilst still preserving their wealth and family home for future inheritance.

*
Auto Enrolment – has it achieved its aim?

A recent Scottish Widows Retirement Report highlighted that two in five UK workers (39%) aged 22-29 are now saving adequately for retirement, up from 30% last year, which can be attributed to the success of Auto Enrolment. However 21% of 20-somethings are still not saving anything for retirement and in fact the biggest losers are the ‘multi-jobbers’ whose combined income across their various employments may exceed the AE threshold but per job is below, which means they are missing out on £90 million a year in employer contributions.

The Challenges Facing Those Over 50

7IM have recently launched their own research focused on people who are approaching retirement or already retired.  This group have faced unprecedented interest rate lows for over a decade and with lower investment returns and the struggle to grow savings, coupled with the prospect of living longer, the effects are particularly negative on this age group.

Nearly half (47%) admit they’ll have to save more for later life and almost two in five (38%) have realised that they’ll need to work longer than planned with many more facing that same decision in the future.  Despite being generally astute with their finances and the average value of their overall assets was over £500,000, only 50% feel they are prepared for when they eventually stop work, only 5% have considered downsizing to release capital, 8% are considering equity release and 8% have plans in place for longer term care.

Meanwhile, UBS Wealth have released research stating that UK savers have lost an average of £2,132 over 5 years due to over-reliance on cash ISAs over stocks and shares.  70% of ISA allowances are invested in cash which, if invested in stocks and shares, would have been worth the equivalent of £46bn more (gross of fees) than the cash equivalent. Of course Stocks and Shares ISAs carry more investment risk compared to the Cash ISA.

A helping hand to get onto the property ladder

The mortgage market remains extremely buoyant despite ongoing Brexit concerns and increasing challenges in the Buy-to-Let sector. However affordability is still an overriding factor for many, and there are a number of options to try and assist buyers onto the housing ladder.

Buying a new build home is an aspiration for many purchasers and the Government’s Help to Buy Equity Loan Scheme is very proving very popular. The Government will lend up to 20% of the cost of a new build property and the purchaser makes up with rest with a 5% deposit and a 75% mortgage. All fees and interest on the loan are waived for the first five years. Other Government backed options include Shared Ownership where buyers can buy a share in a property minimum 25% up to 75%, which is not restricted to new build homes, and the Help to Buy ISA where the Government gives a £25% bonus on savings up to a maximum of £3,000.

A lesser known option is the “joint application/sole proprietor” mortgage in which a single applicant on their own would not be able to secure a mortgage but enlists the help of a second applicant who effectively acts as a “guarantor”. The Guarantor does not have any claim to ownership of the property so if they already own a property or wish to purchase a property, they can avoid the 3% SDLT surcharge.  This can be useful in a number of scenarios where a first-time buyer needs the extra affordability that a family member can provide e.g. a parent or grandparent.

Please let us know if you require further guidance and we can put you in touch with a Mortgage adviser.

Just a little reminder of the tax changes that came into effect in April this year:

*
The JJFS sports stars continue to put themselves through their paces and since our last newsletter Simon Jackson and Hannah Savidge have been testing their running skills for various good causes.

Cast your mind back to the freezing weather we had during the winter, and on Sunday February 4th, Hannah and a team of friends braved the elements to take part in the Cancer Research Winter 10K.  Beginning in Trafalgar Square, the route passed many iconic landmarks in central London and with 20,000 runners taking part, the roads were closed specially for the event. Despite the freezing conditions there was very much a party atmosphere and Hannah and her group raised an impressive £947.

Simon has been busy burning the rubber (of his soles) and in April managed a personal best of 52:57 in the Regency 10K around Leamington Spa which raised £20,000 for local charities. He followed this with another personal best of 52:11 in the 2 Castles 10K during June, one of the major events in the area featuring 4,000 runners. This year the event raised over £100,000 for charitable causes. The pressure is now on for Simon to do a half-marathon.  Watch this space! 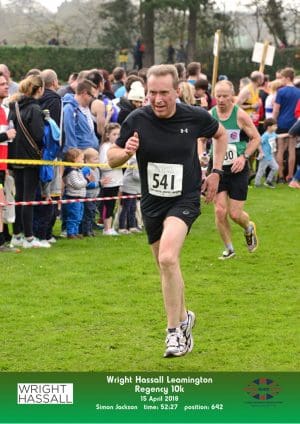